Local Footpaths_
Details
Surrounding the hamlet of Eals are several footpaths, which you can see from the large scale map displayed in the hallway. Not all of the footpaths shown on the map are still open or usable.

If you turn left from the front of the Chapel the road becomes a footpath that soon takes you to the river. The bridge at that point shown on the map leads across to link up with the South Tynedale Trail. It was washed away in a flood in May 2013 though it has recently been rebuilt and is now open again.

The footpath from the village does however continue on past the bridge to link up with the South Tyne trail about two miles further on near Lambley, though it is a steep and difficult path in places.

The footpaths around link up to several national trails quite close to, which in turn lead to a maze of other trails and footpaths in and around the Pennines and farther a field. 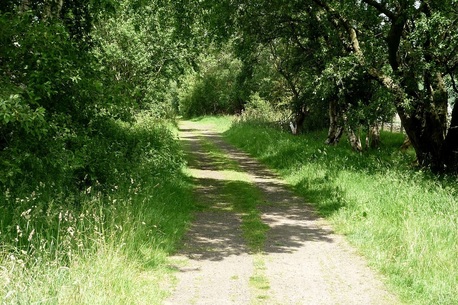 You can also join the South Tynedale trail about     1.5 miles from the ‘Chapel’.
Go right from the cottage and bear right at the end of the road towards Knarsdale.
Turn right just before the church and then right again onto the main road.
Bear right under the bridge, after a few yards there  is a path up the bank that take you up onto the        Trail.

If you are on a bicycle or in a car, continue up the main road under the bridge for about 400 yards and there is a turning into a small area in the Trail where you can park your car.

The Trail goes north to Lambley viaduct and on to the site of  Featherstone Park Station.
Going south it follows the route of the south Tyne River to Alston.


Walking
﻿
Cycling
﻿
Even the main roads around the North Pennines are not busy and are usually suitable for cycling, in addition there are many smaller roads that can be all but deserted.
Also there are trails like the South Tyne Trail nearby and many longer distance trails, for example: -

-C2C (from west to east coast),
-Pennine Cycleway,
-The Walney to Wear (and Whitby) National Cycle Routes,
-Wheels to the Wild Cycle Route,

Details and maps for which can be found and downloaded free on line at www.northpennines.org.uk. An Ordinance survey map as displayed in the hallway though should be sufficient for planning your own local trips.

Web sites: - Further details of all these walking and cycling routes and trails can be found on line of course, an example of some sites are suggested below.
These also show some of the historical and recreational facilities that are available in the area, to help you make the most of your holiday: -


Some Local Places to Visit: -
with approximate mileage from The Chapel

More details of some of these and other specific attractions
are displayed in a selection of tourist leaflets at the cottage,
or many more can be obtained from the Tourist Information
Centre at Alston and in the library at Haltwhistle.